No two pregnancies are ever the same. A woman’s body responds differently to pregnancy compared to another. While some signs and symptoms are already expected, some come as a complete surprise!

As the one who knows me very well and the one who’s with me most of the day, my husband noticed some quirks that came with my pregnancy. Some of these we talked about on a serious note, but most of these we just laughed about!

Has your husband ever found a couple of strange things with you during your pregnancy? Whether you’re currently expecting your first, second, or third child, check this list and find out if these are familiar experiences for you, too! I have always been a morning person. I can get out of bed at 4 or 5 in the morning to start working and power through the day. I can even set aside time to clean and organize the house despite the workload. However, during the first trimester, I’d wake up much later and feel sleepy again right after breakfast. There are days I’d literally just wake up to eat and watch a little, then I’d sleep some more. Sometimes I’d joke that my exhaustion is equivalent to cleaning the entire house thrice even when I literally did nothing.

He claimed I suddenly became big on asking for hugs and cuddles, when I wasn’t like that before I got pregnant. I also remember this time when he had to meet a client for work, and I specifically asked him to go home before the sun sets. As soon as I said it, I realized I totally sounded like a mom, but I didn’t regret saying it anyway. It just comforts me more when he’s physically around.

During the first trimester, my husband and I enjoyed watching “Old Enough” on Netflix. While we were talking about parenting one mealtime during the third trimester, I had to Google “Japanese reality show with kids on Netflix” to remember what the show was called. I am usually the one who remembers names and titles between us two, but now it’s not necessarily the case.

My husband is the one who cooks in our home. During the first trimester, food started tasting differently for me, so my husband often gets confused about how he’d season our food. What’s already salty for him is still too bland for me. What’s worse is that whatever I eat produces an inexplicable aftertaste.

One dinner time, I brought out a block of cheese from the fridge. I sliced it into strips, and… I paired it with rice! My husband shot me the look, and I casually just said it’s the exact taste I was looking for that night! On a different day, I took the mayonnaise out of the fridge, and generously poured it on my serving of rice. Please don’t ask if I got the look again.

While he was at work, I sent him a message saying I feel like eating pininyahang manok. On instinct, he replied, “Did you see that on Facebook again?” I had to laugh because he was right. That was the same situation when I requested for macaroni salad and French fries. Who could blame me, the photos looked appetizing!

I had a lot of night sickness during the first trimester. One night, as soon as I got out of the restroom, I cried because I was convinced my baby wouldn’t be able to eat because I threw all my dinner up. My heart was broken. There was also a time I cried because my husband promised to cook carbonara, but he requested if I could wait for the next day instead. I understood he was tired, but that broke my heart, too.

“It’s all over the house,” he’d say. True enough, my thick and long strands of hair are present on my pillows, on the floor, on the bathroom sink, in the kitchen, in the dining room, and literally everywhere I would go. They were like my footprints! He’d say, “Everywhere I go, hair fall follows!” Well, it’s just proof that I’m home, right?

Truth be told, most of these things were also strange to me as they were happening. I do catch myself surprised, too! No wonder my husband finds them weird or strange. I couldn’t imagine how he must be feeling being with someone who’s undergoing drastic physical and emotional change in a matter of weeks! Our keys to overcoming these strange feelings were a lot of reading and communicating. I would usually search and read up if at least one woman goes through the same experiences as I do, and my husband and I would take time to talk about it – again, either with serious tones or with a lot of laughs! 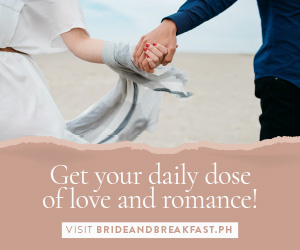